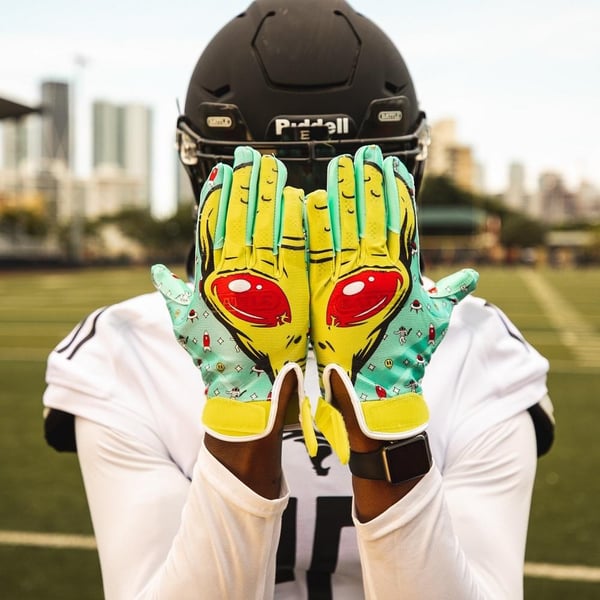 Having the right equipment is necessary when stepping onto the football field. Though pads and helmets are at the top of the list, skill position players must have the right football gloves. Receivers and running backs in particular have a lot to gain with the implementation of the right gloves.

Thankfully, Battle football gloves bring you the best of the best. Whether they are nightmare gloves, graffiti gloves, clown gloves, filthy rich gloves, or youth gloves, Battle Sports can provide style and function like no other. Here are some of the best gloves out there right now. 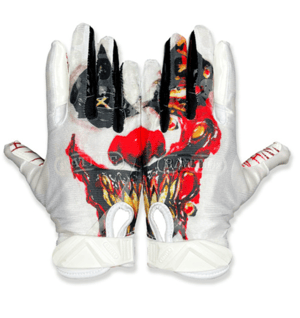 
Making a statement on the field is a must. What better way to make a statement than with these Pennywise football gloves from Battle Sports? Elevate your game and intimidate the competition with these unique gloves.

On the outside, the nightmarish clown gloves feature an evil, smiling face with jagged teeth. On the palms, a continuation of the face and “ha ha” scrawled throughout in a horrific font. It is the kind of lasting impression that will get into the head of opponents before the game ever starts. 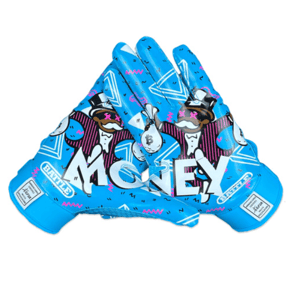 Every player who steps on the field has big league visions. Making it to the big leagues and collecting that big league check is something that nearly every play aspires for. So, why not wear that mentality in your gloves?

Filthy rich football gloves can make you feel like you are on the cusp of a big contract. These Battle gloves come in three different colors: neon green, neon pink, and a bright baby blue. There is a color to suit any style of play and player.

If that weren’t enough, the design shows that each player is about that money. The Monopoly man stands with arms wide open and money bags in his hand. A plethora of background designs serve as the backdrop, giving these gloves a fun and unique feel that is difficult to replicate. Tell defenders to show you the money before you take the next play to the bank. 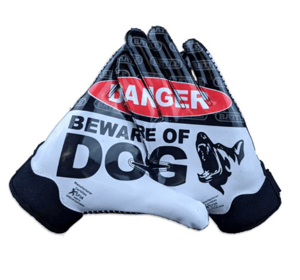 Every player these days wants to have that dog in them. No matter the fight, players with that dog in them come ready to do battle. So, what better way to show that than through the right football gloves?

The backs are simple, featuring black striping and the Battle logo inside of a black oval. The palms feature a “Danger: Beware of Dog” sign with a vicious, barking dog silhouette. Coming in both black and blue as well as black and red, you can let the opposition know that you are bringing that dog on every single snap. 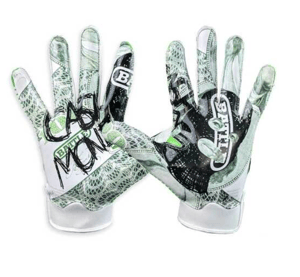 There are a lot of ways to show your value as a player. Many who step foot on the football field are looking to show that value and make that money. What better way to prove what kind of money player you are than with Cash Money gloves?

These adult and youth football gloves range from small to double-XL and bring a unique style. Battle Sports offers these green, black, and white gloves to allow the most skilled players to show that they are money whenever they step on the field.

The backs are adorned in neon green and white, complete with the Battle logo. But it is the palms that really grab the attention (and the passes). The palms look like a crisp dollar bill, with the phrase “cash money” scrawled over the Battle logo. If you want to show that you are a money player this is the way to go. 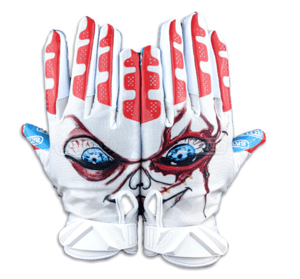 Striking the fear into your opponent can go a long way towards optimizing performance. There are a few nightmare gloves and clown football gloves out there to choose from, but this may be one of the most terrifying options out there.

The palms are innocent enough. With a baby blue background and the white Battle Sports logo all across, it seems simple enough. But flip them over and that’s where the terror begins. The other side features bloodshot eyes and a sinister grin, striking fear into the hearts of defenders on each play. Bring the intimidation from the first play of the game.

There is something to the mantra of “look good, feel good, play good.” When you have the right equipment, it can improve your ability on the field and instill confidence in a way that only the best football equipment can offer.

There are a number of options available that can help skill players like wide receivers, running backs, and defensive backs perform their best. It can be as simple as finding a style of football glove that suits your needs wherever you are on the field. 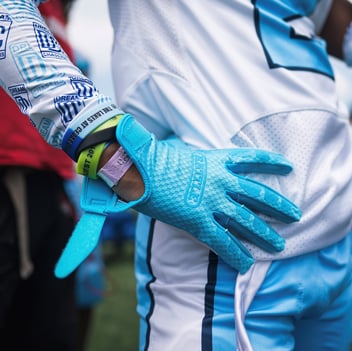 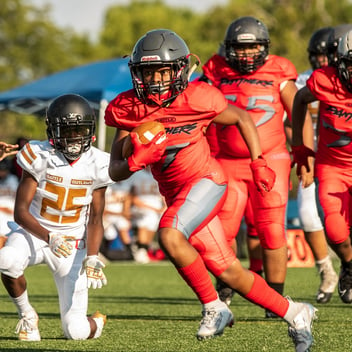 There are any number of sports that children can play starting at a young age. Football is one of... 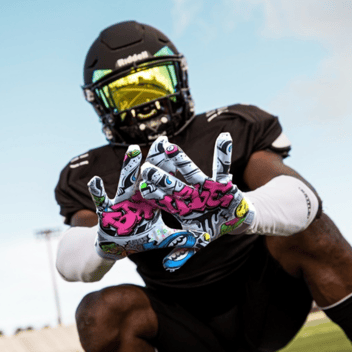 Holiday Gifts for a Football Player from Battle